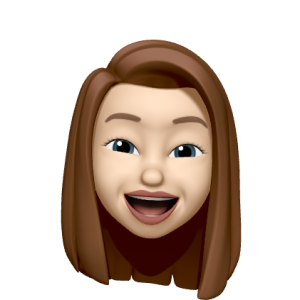 My contractions were so strong and frequent that she couldn’t check the baby’s heartbeat. I said I felt like I needed to push, and everyone in the room started to move!

When I was pregnant with my first, I read every birth story I could find. And I still love reading them. Over the next couple months I plan to share each of mine, starting today with my first, who was due September 25th, 2013. My sister-in-law was getting married Saturday September 14th and it was about a 5 to 6 hour drive from our place. Seeing as it was my first baby (labour wouldn’t move too fast, right?), and we weren’t getting on any planes, we felt pretty safe going to the wedding. I told anyone who asked that we would be ready for baby after the 15th. We had a great time at the wedding, and countless people regaled me with stories of women who went into labour right after a wedding. I reassured them I had some time and wasn’t having this baby quite yet.

We returned home the Sunday and on Monday September 16th (a full 9 days before my due date – which felt like A LOT) I got home from work and walked the dog like I always did but cut it short because I was feeling so tired. Alex (my husband) got home and I told him I was skipping dinner because I was feeling a little nauseous (and no I wasn’t putting any of these signs together) and got to work on a painting I had been doing for the nursery.

Around 8 pm I walked into our bedroom holding the wet painting. I had put newspaper on the floor to set it on to dry. I, being super pregnant, couldn’t fully bend over, so I half bent and kind of dropped the painting to the ground. And as I stood up, I SWEAR I heard an audible ‘pop’ (but likely only felt it) and a GUSH of water went everywhere. I went into immediate panic mode and called Alex to come help me out as I made my way to the bathroom.

Funny thing is, one of my fears during my pregnancy was that my water would break just like this, like it does in the movies, while I was at work. My doc assured me that wasn’t really a thing (I mean, it happens, but not often), and that most people are well into labour before their water breaks. And it also is often a ‘leak’ more than a multiple-towels required gush.

I did NOT feel ready, I thought I had time! I still had four more days to wrap up things at work. The nursery wasn’t quite done (and it would be another 6 months before that painting made it to the wall). I called my doula Angie first. She had attended literally hundreds of births and I had attended zero so I wanted her advice. She said I should likely give the hospital a call and see what they said. I was GBS-positive (more on that another day) so she thought they would probably want me to come in and at the very least, start my antibiotics. She was right, so we took our time packing up, I ate some toast and pb (even though I definitely didn’t feel like it) and we made our way to the hospital where Angie met us.

We arrived around 9:30 pm and my doctor happened to be on call. She was busy when we arrived, so I was given IV antibiotics for GBS and once that was done, got to work walking. Angie suggested stairs to get this labour moving. At this point I had boundless energy, so we went up and down countless flights to encourage labour. I still wasn’t feeling contractions, but I was having cramping, so thought something was happening.

It was close to 11:00 pm by the time we were back in the room and my doctor was ready to see me. She asked me if I was having contractions and I said no, but that I was feeling quite a bit of cramping. She said she wanted to induce me immediately by starting Pitocin, and I asked to wait just a few hours to see if these cramps would ramp up on their own. Pitocin can often be just the first in a series of interventions, so I wanted a few hours to see what my body would do. She was not pleased and told me I was putting my baby in danger, and told me that if I wanted to wait, I would have to leave because ‘this room is for labouring mothers and you are not a labouring mother’. She told me she would see me at 7 am when she would induce me with Pitocin because I was not going into labour on my own. After that she decided to check my cervix. I was ‘almost 5 cm’. My straight-faced and silent doula smiled at that. She was the only one in the room that was confident I was already in labour. I wasn’t, but I was 100% confident that my body was working away at this and that I would ‘go into labour’, which was confirmed with those 5 cm.

And then I was banished to the postpartum ward!  The bright glaring lights of labour and delivery were replaced with the dim and silent recovery ward. It was like a breath of fresh air. And in that dark quiet peaceful space, as the nurse took my vitals, my first ‘real’ contraction came. It was 11:30 pm. Angie could see it on my face and immediately wrote down the time in her notebook. When the nurse left, Angie suggested we get moving again. I walked the hall back and forth, with Angie and Alex on either side of me. Angie would give me breathing and movement tips and Alex kept track of my contractions on his phone. By midnight they were 3 minutes apart. I was largely in my own little world and not really aware of what was going on. At one point I remember asking if my contractions were regular, and Alex and Angie looked at each other and smiled ‘almost to the second’.

Around 12:30 am my legs grew shaky and I wanted to get in bed and rest. I laboured on all fours and then on my side, holding oh so tightly to Alex’s hand to ground me. At one point, he was snacking on a Cliff bar and ohhh the smell! I didn’t have the energy to talk so I literally used my hand to turn his face away from me and listened through the fog as he and Angie laughed.

I thought I had hours and hours to go but was happy with how I was doing. My contractions started to get really intense and I was having multiple contractions back to back, no chance to rest in between. Just before 1 am, a nurse came in to check on me and was surprised by how intense my labour was. My contractions were so strong and frequent that she couldn’t check the baby’s heartbeat. I said I felt like I needed to push, and everyone in the room started to move! The nurses quickly put me in a wheelchair and wheeled me back across the hall to labour and delivery, just two hours after I had left.

Up until this point I had been labouring on my side so I asked if I could push on my side too. I was told no, that it was safer to go on my back (not so – read more here). But I didn’t have any more fight, so I rolled onto my back. After about 30 minutes of pushing our baby girl joined us at 1:34 am, all 6 lbs 13 ounces of her. 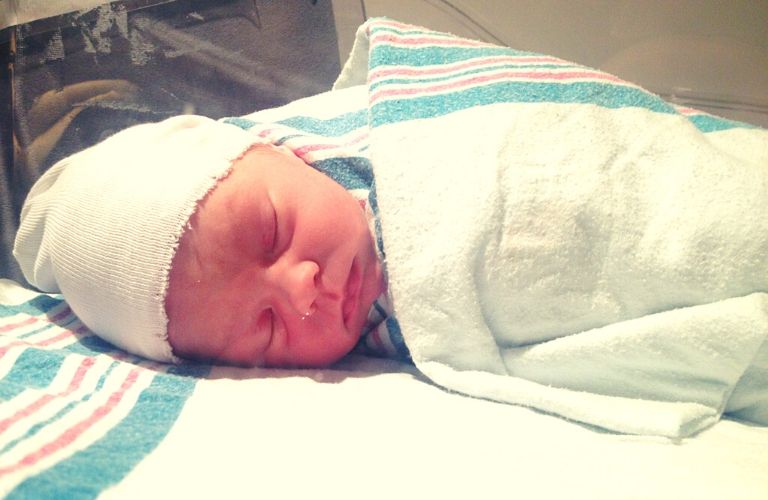 Despite its tense or uncomfortable moments, I think this might be my favourite of my three births (even though it feels like I shouldn’t have a favourite?). During labour I just felt so in control and peaceful. Rather than pain, honestly, most of my contractions felt like intense pressure (at least that’s the way I remember it!). I had practiced meditation and breathing daily for weeks leading up to the birth, and I think that definitely helped (I didn’t for the next two – and there was a definite difference! I wouldn’t describe any of that as just ‘pressure’). 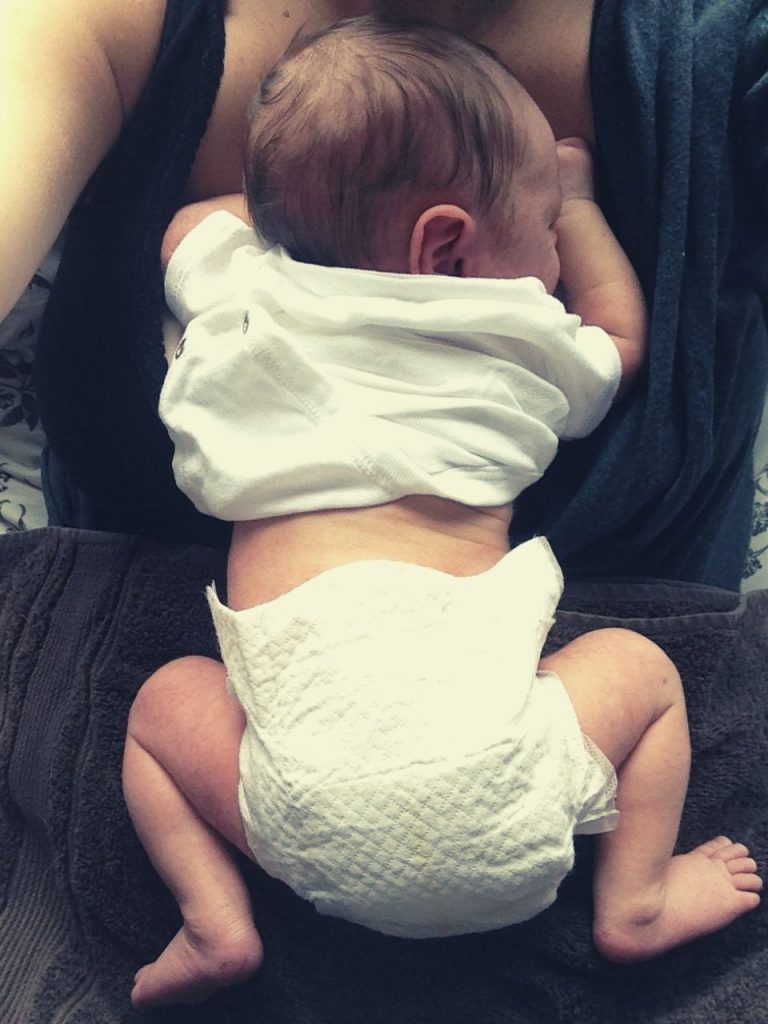 That little peanut turns 7 this September and I can hardly believe it. The weeks that followed her birth were so hard. Learning to breastfeed (both of us) remains the hardest thing I’ve ever done. She was tiny and for 3 weeks her prescribed feeding frequency from my doctor meant I slept in 1-hour (max) increments. It took a long time to find our new normal, but we did and haven’t looked back. 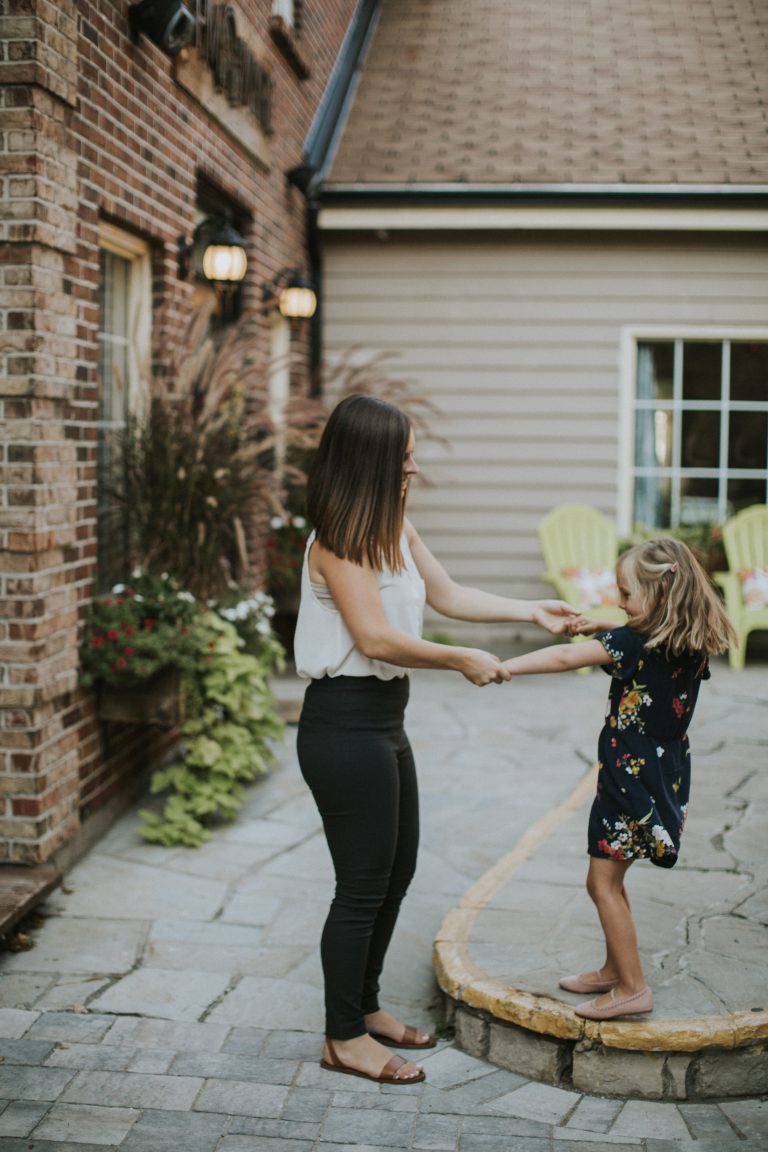